The main thing that separates Valorant from other similar titles like CS:GO is its wide selection of Agents that players get to choose from. Each agent has their own abilities that can help your team clutch a round, and gives each player their optimal place in the meta. With Episode 3’s introduction, we also got a brand new agent, a big shake up in the in-game economy, and a reshuffle of which agents are most effective. So, let’s dive in to our Valorant Agent Tier List.

When Riot released the patch notes for Episode 3, a little piece of me died inside. As a Raze main, my agent got hard nerfed. Her Boombot price got doubled and her ult points went up. But it’s ok, because I also play Sova. Except his ability prices and ult points went up too. In fact, there’s barely an agent who hasn’t been nerfed in this latest update. But, after playing with the new patch, it doesn’t sting as much as I thought it would.

But, it isn’t just the agents who have had some big changes with this patch, weapon prices have been changed almost entirely across the board too. And while my brain still needs to work out what I can afford each round now that everything is different, knowing that our Jett will be able to grap an Operator for less now? Amazing. 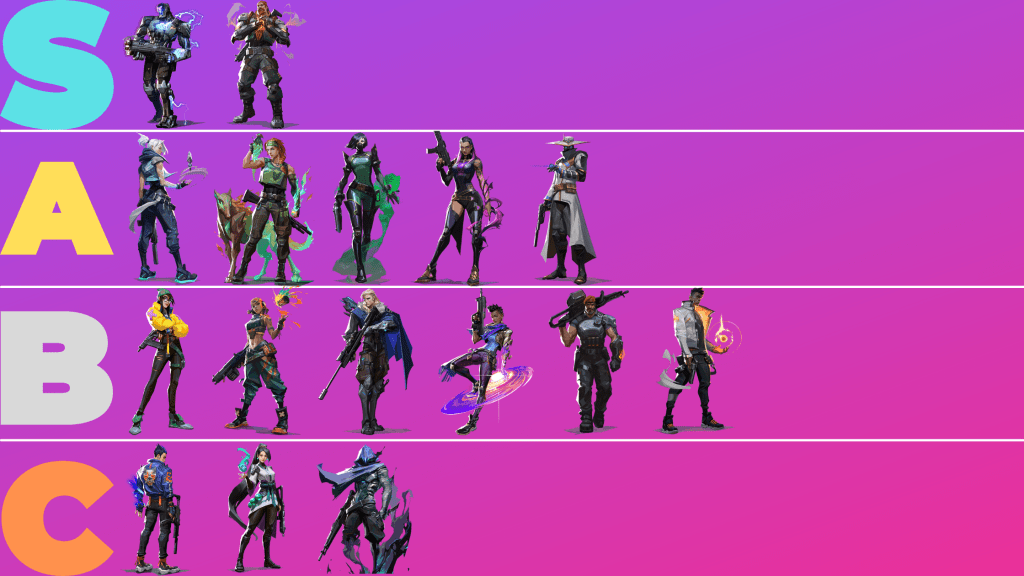 Coming in hot at S-Tier we have the new agent Kay/O, and Breach. While Breach’s flashes got reduced from three to two, his other changes actually buff this agent – unlike most of the others in patch 3.0. His Fault Line ability is now quicker, wider, and concusses enemies for longer. His Aftershock has now changed to three blasts instead of one, and his ult now covers more ground as well. All in all, you should expect to see a lot more Breach players popping up in your games this Episode.

And, of course, the new agent Kay/O comes in right at the top. This shouldn’t come as a surprise to anyone who’s been playing Valorant for a while, every new agent tends to feel powerful when they first come out and end up getting nerfed further down the line. Kay/O’s suppression ability has really changed the meta of the game for good though, so I suspect he will stay up near the top for quite some time. His ult ability allowing him to be revived by a teammate means he can both play as a perfect Sentinel and can be an effective entry fragger.

Next up we have our A-Tier agents. These are agents that should be near the top of your list for building a winning team. While Jett has dropped down from S-Tier thanks to her ability nerfs, she’s still the best pick for an Operator player, even more valuable with the price decrease. Skye got a nice buff by increasing the vision on her Trailblazer, helping her to bring more value to a competitive lineup.

Cypher’s ult points actually got decreased with this patch, so Neural Theft only needs six orbs instead of seven. Viper still holds her spot as post-plant Queen, while there was a small nerf to her snakebite duration and price, they buffed the damage spread on it to stop people trying to tank it. And Reyna managed to remain mostly untouched in the recent patch, helping her to snag a spot on the A-Tier roster.

Killjoy’s ability to solo hold a site isn’t as strong as it once was with the introduction of Kay/O’s suppression tactics, and with the increased cooldowns on her Alarm Bot and Turret, she finds herself in B-Tier. Brimstone wasn’t affected much in the patch, so he holds still in this tier. Astra is still a tricky one to place as her performance varies so much between ELO, regions, and playstyles that we’re just going to leave her in here for now. And, Phoenix stays in B too. He’s useful and his ability to heal himself always comes in handy, and all he got in the patch was a price increase for his blinds, so he’s still a fairly solid pick.

Now for the two that it hurts to put in here, Raze and Sova. My babies. With both these agents, their abilities have gone up in price (Raze’s Boombot 200 >> 400, Sova’s Owl Drone 200 >> 400 and Shock Darts 100 >> 150), and they both now need an additional ult orb, going from 7 to 8, for theirb Ultimate abilities. All of a sudden, throwing a Boombot to clear corners each round can’t happen – same with Sova’s drone. While neither agent is bad after these changes, they’ve definitely become less effective.

And, finally we have our C-Tier agents. Even though my friend yelled at me for putting both her mains in this tier, there isn’t really anything I can do about it. Sage got nerfed, again. There was a time when she was one of the most powerful agents, but sadly, no more. Both her Slow Orb and Barrier Orb got a price increase, and her Resurrection Ultimate ability went up from 7 to 8 Ult Orbs.

Omen also got hard nerfed with this patch. While his Paranoia blind ability has become cheaper, his Shrouded Step teleport went up. And, as a smokes-based character, the fact that the cooldown time has increased for using them, and he only gets one as a signature ability (having to buy the other one instead) really lowers his usefulness in a line-up.

Do you agree with our tier-list? Let us know in the Discord community or over on Twitter. (Also, sorry if your Agent is placed low, mb).

Team Command Has Entered The Chat